On 24th February, I presented a one-day workshop in Sydney for Speech Pathology Australia. The workshop was titled "International speech acquisition: A world tour".
The workshop covered:
I really enjoyed working with the group of enthusiastic participants who are equipped with many respectful techniques for working with children from multilingual backgrounds. 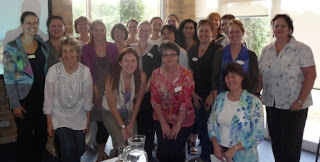 During February, I have been fortunate to work with some wonderful people in order to continue to achieve the aims of my Future Fellowship. These have included:

Year 1 of my Future Fellowship

The first year of my Future Fellowship concluded on 7th February, 2011. Over the past year, Kim Woodland from The Research Institute for Professional Practice, Learning and Education (RIPPLE) has summarized the year in a series of updates published in the RIPPLE newsletter. I have copied these below.

UPDATE 1:
Sharynne McLeod has created a blog—‘Speaking my languages’—to record her experiences while working on her ARC Future Fellowship research. Sharynne’s fellowship will allow her to conduct research into communication impairment in multilingual children, which is currently both undiagnosed and over‐diagnosed due to a lack of culturally‐sensitive measurement tools. Her blog can be found at http://www.speakingmylanguages.blogspot.com/.

Over the last few months, Sharynne has combined research and travel, as she explores communication impairment in multilingual children. In May, Sharynne visited Hong Kong University, where she presented two seminars for speech therapists: ‘Children’s speech acquisition’ and ‘Prevalence, risk, and impact of childhood speech and language impairment’. This was followed by a trip to the United States in June, where Sharynne visited the East Tennessee State University and presented another two seminars: ‘Speech sound disorders in children: Typical acquisition, prevalence, risk, and impact’ and ‘Listening to children through the Sound Effects Study’. Sharynne also visited the Child Study Centre at the University. Next was a trip to Oslo, Norway, to give an invited speech at a children’s speech acquisition workshop, and to attend the 13th International Clinical Phonetics and Linguistics Conference. Sharynne co-presented three papers/posters at the conference.


UPDATE 2:
Prof McLeod has continued at her usual incredible pace in the past six months, covering more of the globe than many people do in a lifetime. The Commonwealth-sponsored Future Fellowship "International speech acquisition in Australia", has provided opportunities to present her amazing research to a multitude of people across the world. On 8 July, she was invited to attend a reception at Speakers House, Houses of Parliament, in London. The event honoured the work of Afasic, the national organisation supporting families of children with speech, language and communication needs in preparation for the 2011 UK National Year of Children with Speech, Language and Communication Needs. While in the United Kingdom, Sharynne spent July working at the Speech and Language Therapy Research Unit (affiliated with the University of the West of England) at Frenchay Hospital in Bristol (which she revisited in late August). Later in the month, Sharynne travelled to Zambia for the International Society for the Study of Behavioural Development (ISSBD) conference in Lusaka on 18-22 July. At the conference, Sharynne presented a paper on behalf of the Sound Effects team (Linda Harrison, Lindy McAllister, and Jane McCormack). While in Zambia she visited a village, and the Mwandi Orphans and Vulnerable Children Project. From 22 to 26 August, Sharynne attended the International Association of Logopedics and Phoniatrics (IALP) conference in Athens, Greece. Along with colleagues, Sharynne presented four papers, hosted a symposium, and also met with the IALP Education Committee, of which she is a member. Sharynne then travelled to Stockholm from 4 to 6 September, to meet with the editorial staff who publish the International Journal of Speech-Language Pathology, of which she is editor. From 7 to 10 September, Sharynne worked with colleagues at Queen Margaret University in Edinburgh, on an upcoming book titled Electropalatography for Speech Assessment and Intervention. Back in Australia, Sharynne presented a 2-day workshop (20-21 September) at the Victorian Department of Education and Early Childhood Development Speech Pathology conference at LaTrobe University in Melbourne.

Hello and thank you!

During my international travels I always try to learn to say "hello" and "thank you" in the languages and dialects of the places I visit. I have received appreciative smiles from taxi drivers in Hong Kong, and waiters in Zambia for undertaking this small courtesy.

One of my colleagues in the UK has recently shown me this fantastic website, that contains videos of school  children saying "first words" in a huge number of languages:
http://www.newburypark.redbridge.sch.uk/langofmonth/index.html

I am certainly going to use this site to prepare for my future travels.