Anna Cronin officially began her PhD two weeks ago as a distance education student. This week she visited Bathurst to discuss her proposal, meet with fellow students, her lecturers, and the library staff. We also managed to finalise a scholarship to support her studies. It was a very productive visit and we look forward to welcoming Anna again when it is a bit warmer.

This week I visited Wagga Wagga to attend Academic Senate. While there, I also visited Kim Woodland and Jo Masters at RIPPLE. Philip Paschke from RIPPLE worked with me to update the Multilingual Children's Speech website. We have almost finalised two more pages. Finally, it was CSU's Foundation Day celebrations - so there were lots of red balloons, red food and red clothing to celebrate (see CSU's video here).

Development of the Vietnamese Speech Assessment

The following article has been accepted for publication and forms part of Ben Pham's PhD.

Vietnamese is the official language of over 92 million people in Viet Nam and nearly four million diaspora including in Australia, US, and Canada. To date, there are no standardized speech assessments for Vietnamese children. This paper outlines the development of the Vietnamese Speech Assessment (Phạm, Le, & McLeod, 2016) through collaboration between researchers in Viet Nam and Australia. The word list contains all Vietnamese consonants, vowels and tones in at least two words with different sequence constraints. Further, the word list was developed to be within the vocabulary range of young children, frequently used by Vietnamese people in different regions, picturable, and either a noun or verb. Picture stimuli were identified and the test was piloted with Vietnamese speakers of different ages who spoke different Vietnamese dialects. A score sheet was designed to include acceptable dialectal pronunciations, and to enable calculation of percentage of consonants/vowels/semivowels/tones correct and presence of phonological processes (patterns). The Vietnamese Speech Assessment is currently undergoing norming and standardization.

Kate Crowe will head to the US for her Fulbright postdoctoral scholarship in less than a month. She visited Bathurst this week to say farewell. She began her visit skating at the Bathurst winter festival (here), she had lunch with some of her Bathurst friends, and finished her visit by submitting a paper that we have been working on for a number of years that summarizes children's consonant acquisition across 27 languages. While in Bathurst, Kate has been profiled in the CSU Thrive Alumni magazine here. Thanks for coming to Bathurst Kate - and best wishes for your adventures in the US.

I am also working with Sarah Verdon and Kate Crowe as postdoctoral research fellows.

This week is NADOC week in Australia. NADOC originally stood for National Aborigines Day Observance Committee. This year’s poster is titled “Songlines Tie All Aboriginal People Together” and was painted by Lani Balzan 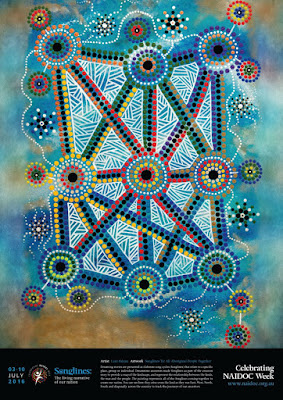 Humanitarian migrants' English language proficiency and integration: "All is well and good but the problem is language"

The 14th Australian Institute of Family Studies (AIFS) Conference: Research to results: Using evidence to improve outcomes for families is being held in Melbourne this week. Helen Blake is presenting a paper titled "Humanitarian migrants' English language proficiency and integration: 'All is well and good but the problem is language'" during the conference. The paper is co-authored with myself and Laura Bennetts Kneebone. It uses data from the Building a new life in Australia: the Longitudinal Study of Humanitrian Migrants that is overseen by the National Centre for Longitudinal Data, Department of Social Services (DSS) www.dss.gov.au/ncld and the Australian Institute of Family Studies (AIFS). CSU has written a news release about the research here.

Celebrating the end of the Sound Start Study

On 30th June, the investigators on the Sound Start Study submitted our final report to the Australian Research Council. We celebrated the official end of the Sound Start Study at CSU Olympic Park on Monday; however, we are in the midst of finalising many journal articles, book chapters, and conference presentations reporting the findings of our research.
Here in an excerpt from the report:


RESULTS: From screening and assessments, more parents (35.1%) and early childhood educators (36.8%) were concerned about their preschoolers’ speech and language than any other aspect of development. Their concerns aligned with clinical testing, underscoring the importance of parents and educators seeking advice when they have concerns. For the RCT, a statistically significant improvement was found between time points (pre PFSS, immediate post and follow-up) for both PFSS and control groups on measures of pre-literacy skills (Aim 1a), speech (Aim 1b), underlying phonological processing (Aim 1c), and wellbeing (Aim 1d); however, there was no statistically significant interaction between group and time. That is, PFSS administered by early childhood educators, was not more effective than typical classroom practices. Considerable variability was evident within each group—some preschoolers showed impressive change in speech/pre-literacy over time; others showed little change, suggesting that specialized support delivered by speech pathologists is still needed for preschoolers with speech impairment to achieve optimal outcomes before school. Child- and family-related variables were explored to identify variables associated with change in pre-literacy and speech production status. Preschoolers who had difficulty producing polysyllabic (long) words had significantly poorer pre-literacy and phonological processing skills (Aim 2); preschoolers who had more difficulty producing polysyllabic words, and had a positive family history of speech difficulties were less likely to improve (Aim 3). Facilitators and barriers to PFSS implementation were also identified encompassing personal, environmental, and PFSS-specific issues.


BENEFITS: DP130102545 has provided new insights into parents’/educators’ concern about preschoolers’ development, the relationship between speech and pre-literacy skills, the identification of preschoolers with speech impairment most at risk for on-going speech and future literacy difficulties, and the implementation of support programs for preschoolers in early childhood settings. A large dataset has been created that will be mined to address future research on preschoolers with speech impairment, their families, and the role of early childhood centres.


OUTCOMES: This research has addressed all of the proposed objectives, and resulted in the production of 2 books; 8 book chapters; 4 peer reviewed journal articles; and 32 (including 5 invited) conference presentations across 7 countries including Australia (VIC, ACT, WA), Canada, England, Ireland, New Zealand, Sweden, United States). A further 3 book chapters and 11 journal articles are in preparation/submission at the time of this report. The PhD student employed throughout the project is due to submit her thesis (comprising 6 publications) in August 2016, and another student achieved 1st class honours for her thesis, based on DP130102545 data.


IMPACT:  A submission was made to the Australian Government Senate Inquiry Prevalence of different types of speech, language and communication disorders and speech pathology services in Australia based on DP130102545; and CI-McLeod contributed to the Education and Employment References Committee: Students with disability in the school system, referring to data from DP130102545 (Hansard 25/9/15).

Recently Children's Speech was published. Elise Baker and I began writing this book about 15 years ago. Last night our families came together to celebrate the our book's release and to acknowledge that it was written throughout most of our children's lives. Our families appear within the book, so we had fun locating each others' photos and input. To our families - thank you for your support and encouragement. Details about the book are here. 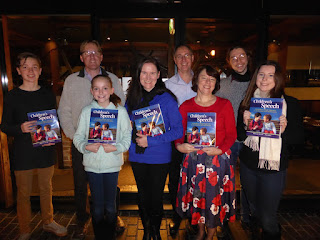 Bathurst during the winter time

It is cold in Bathurst, and we are about to begin our winter festival, complete with ice skating. The kangaroos on campus at Charles Sturt University have ventured onto the sports fields closer to my office. 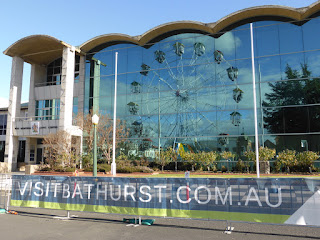 Ninh Dang Vu has been my research assistant from March - June this year. He has assisted with many tasks including data entry into SPSS and Excel, scanning, confidentializing, coding and organizing video, audio and data files, cataloguing journal articles and book chapters, and archiving my blog entries. Thank you Ninh!