A review of the book, Multilingual Norms has been published in the Journal of Linguistics and Language Teaching (JLLT), vol.2(1). It concludes: " Altogether, the current publication, edited by Madalena Cruz-Ferreira, can be regarded as highly valuable for teachers, researchers and language clinicians. The authors successfully present an eminently readable book which is based on solid empirical research and which hopefully finds the readership it deserves."

Jane McCormack has received her excellent PhD examination reports while visiting Bathurst with her supervisors (A Prof Linda Harrison, A Prof Lindy McAllister). We have been working on a postdoctoral fellowship application to continue Jane's important research. Recently, Jane has commenced a lecturing position in speech pathology at CSU. We look forward to seeing Jane's continued contribution to the profession and to children with speech, language, and communication needs.
More details about Jane's PhD can be found here

Te reo Māori (the Māori language) is spoken by the Māori people of New Zealand.


Around the year 1300 AD, seven boats containing the Māori people left their home in Rangeātia, Tahiti and travelled to Aotearoa (literally, the land of the long white cloud, and later called New Zealand). Six boats settled in the North Island and one in the South Island. The Māori people were warriors, and are known for the haka (performed internationally by New Zealand rugby teams), poi dancing, tattoos, carving, and weaving.
In written Māori there are 5 vowels: a, e, i, o, u
10 consonants/diagraphs: p, t, k, m, n, ng, wh, h, w, r
Important words 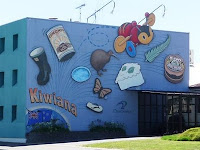 New Zealand and Australia are often said to have sibling rivalry. In many ways their culture and history are similar, with white (British) people settling in each country at similar times. There are many similarities between New Zealand and Australian English consonants, vowels and diphthongs. The most noticeable difference is in the pronunciation of the high front vowels ‘i’, ‘e’ and ‘a’. Speaking the phrase “fish and chips” is one way many people use to differentiate these two dialects of English. Another area of difference is the vast size of Australia vs. the compactness of New Zealand. Australia’s size means the Aboriginal and Torres Straight Islander people speak hundreds of different languages. In contrast, Māori is the same (although with some dialectal differences) throughout New Zealand.
﻿

The 8th Asia Pacific Conference on Speech, Language and Hearing was conducted from 11-14 January. It was held at the University of Canterbury in Christchurch, New Zealand. The program listed around 120 papers from 23 different countries. Here are the papers my colleagues and I presented:
I particularly enjoyed listening to the key note address provided by Kathy Lee (Chinese University of Hong Kong) titled: "When a SLP meets a psychometrician: The journey of constructing assessment tools"

Tongan is spoken by the people in the Kingdom of Tonga. Fifty two of the 176 Tongan islands in the South Pacific archipelago are inhabited.
Tongan consists of
5 vowels: a, e, i, o, u
12 consonants: p, t, k, m, n, ng, f, v, s, h, l, ‘
The consonants p, t, k sound voiced to English speakers.
Unlike English, Tongan words can commence with ng.
The ‘ is phonemic as can be seen in the following Tongan words:
Here are some of the words I have learned: 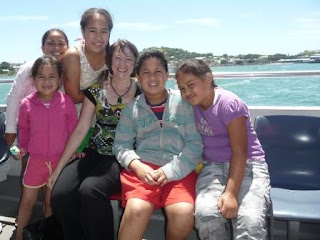 While visiting New Zealand, my family and I spent time with an Australian Tongan family. They come to New Zealand annually to visit relatives, to participate in the Tongan church, and keep in touch with their language and cultural heritage. We were invited to join them at the Saturday beach picnic that followed the Tongan church’s week of prayer. There were about 100 people at the picnic: from grandmothers to babies and all the children played and were cared for by the whole community. People ate, shared stores in Tongan and English, swam, kayaked, and later the men and boys played rugby league in the ankle-deep water. 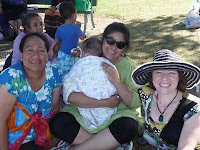 We were very welcomed and I learned a lot about Tongan culture and language, particularly from two women: one who is a social worker working with Pacifica people, and one who is a high school teacher. Some of the things that they mentioned are that church and community is very important. At church events there is always a lot of food so that no one in the community is hungry. Women are respected. Tongan people are happy, and will often laugh seemingly for no reason. Not all of the grandparents can speak English, so speaking with their family is one motivation for children to learn and retain Tongan. My friends are fortunate to be able to visit New Zealand annually to retain their family, cultural and linguistic heritage. 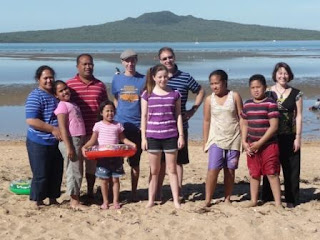 Hugo (2010) describes circular migration in Australia where many families migrate from their homeland, to Australia, to their homeland, and back to Australia. Many more families in Australia have circular visiting where this pattern occurs regularly, but for shorter periods of time. This circularity in Australia’s people continues to enhance our cultural and linguistic diversity and heritage.
Hugo, G. (2010). Circularity, reciprocity, and return: An important dimension of contemporary transnationalism. ISSBD Bulletin, 58(2), 2-5.