I have been at the Albury campus of Charles Sturt University (CSU) over the past few days.

One reason for my visit was to celebrate with Dr Jane McCormack at her PhD graduation ceremony (see previous post). Jane has been awarded the most outstanding PhD thesis in the Faculty of Education for 2010. This is an amazing achievement. She is now a lecturer in speech pathology at CSU.
ABC Radio recorded an interview on the day of her graduation about her research here:
﻿ ﻿ ﻿ While in Albury, Jane and I have also spent time with Nicole Limbrick, our new honours student. Nicole is examining speech pathologists' protocols and decision making during assessment of children with speech sound disorder (speech impairment). She is at the exciting stage of finalizing her question and designing the research methodology.
﻿
﻿ ﻿ ﻿

It is always a pleasure to walk alongside students as they read, plan, implement, and write up their research -- and are rewarded for their efforts at graduation. 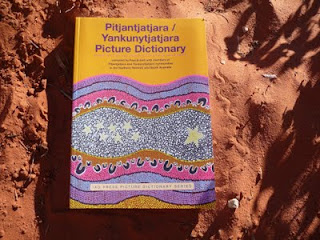 Pitjantjatjara and Yankunytjatjara are two similar, but distinct dialects of the Western Desert language group spoken by the Anangu people in the centre of Australia near Uluru-Kata Tjuta.
Pitjantjatjara and Yankunytjatjara have been written using 14 letters from the English alphabet, with some consonants being underlined to indicate that the sound is retroflex (made with the tongue tip back). There are
6 vowels: a, aa, i, ii, u, uu
2 diphthongs: au, ai
17 consonants:
5 stops: p, t, t, tj, k
5 nasals: m, n, n, ny, ng
7 liquids and glides: l, l, ly, w, r, y
1 trill: r (never in word-intial position)
The first syllable of every word is stressed.
Many words are created with the addition of suffixes. For example, karu = creek, kutu = to, therefore karukutu = to the creek.
In the Pitjantjatjara/Yankunytjatjara picture dictionary there are no words listed for hello, thankyou, or yes. There are four different words for go (go away from, go hunting, go in, go past). Here are some words

Uluru, Kata Tjuta and the Anangu people in central Australia 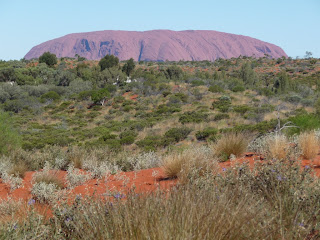 During April I have taken annual leave with my family. We are visiting Uluru - Kata Tjuta National Park in the centre of Australia. Uluru (named Ayers Rock by white explorers), is one of the largest monoliths in the world with a circumference of 9.4 kilometres. Kata Tjuta means “many heads” (named The Olgas by white explorers). It consists of more than 30 rounded red domes rising from the desert floor. There has been a lot of rain recently, so the landscape is lush with vegetation, and the gorges contain water. This is very unusual for this desert region of Australia. 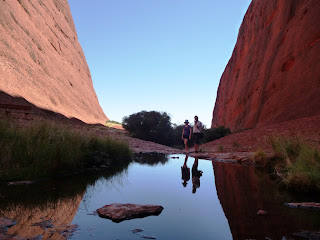 The Anangu people are the traditional Aboriginal owners and oversee the Uluru-Kata Tjuta National Park. They believe that there are three ancestors to the region: Mala (hare wallaby), Kuniya (woma python) and Liru (poisonous snake). Uluru and Kata Tjuta are sacred to the Anangu people. 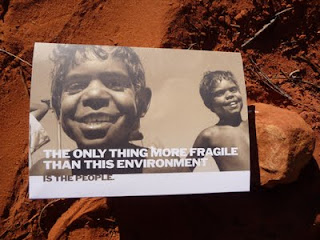 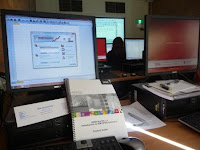 I spent today in a workshop run by Alan Taylor from Macquarie University on SPSS(R) Statistics Training. It was useful to brush up my statistical skills and to find additional tricks in the latest version of this powerful statistical program. 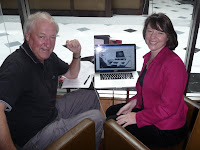 ﻿﻿﻿This week I worked with Bill Hardcastle from Queen Margaret University, Edinburgh on our book titled Electropalatography for Speech Assessment and Intervention. Bill was visiting Sydney from Scotland, so we took the opportunity of being in the same place (and country!) to select figures for inclusion in the book.
This photograph from the 1970s shows Bill demonstrating the Reading EPG2 system.