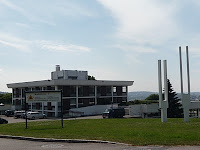 I was fortunate to visit the Bredtvet Resource Centre in Oslo that provides specialist assessment and intervention services for children and adults with communication needs across Norway. In addition, they aim to contribute to develop knowledge via research. In 2009 there were 33 speech therapists, 6 psychologists, 8 pedagogues, 1 physiotherapist, 2 ENT doctors, 1 dentist and 2 linguists working at the Resource Centre.

I watched an intervention session in Norwegian with a 6-year-old boy who was an excellent skateboard rider and had difficulties producing consonants as a result of his cleft lip and palate. Marianne Moe and Jorunn Lemvik conducted the session. 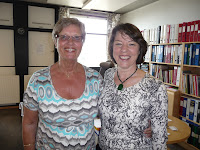 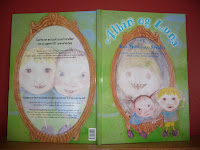 Anne Berit Andreassen, the head of the department focussing on cleft lip and palate, voice, aphasia and dysarthria, provided a lot of information about how logopedia (speech pathology) in Norway developed as a part of special education, and how assessment and intervention is predominately free for all people who need it. We compared the problems for accessing rural services in Norway vs. Australia.

Listening to children in Norway 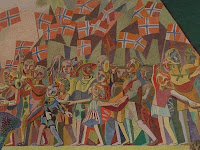 Norway and the other Scandanavian countries have a strong tradition of pedagogy and listening to children. This was very apparent in so many places throughout Oslo. The Oslo City Hall has paintings of children on many of its walls, including the fresco of children in the annual Oslo day parade. 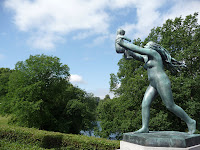 Many of the statues in the famous Vigeland Sculpture Park are of children (left).

Many street signs include children. 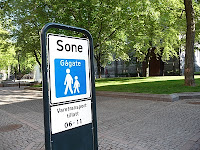 However, my favourite place was the International Museum of Children's Art: a gallery completely dedicated to showing children's art from around the world in a setting that is vibrant with a child-friendly atmosphere. Most of the art has been collected around themes including "Fathers", and "Disasters". They were interested to hear of our "Children draw talking" art exhibition. 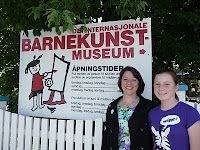 The 13th International Clinical Phonetics and Linguistics Conference, was held in Oslo Norway. It was an extremely stimulating conference with attendees from 26 different countries speaking even more languages. Speech acquisition around the world was a topic that was discussed frequently both within formal sessions and during the breaks.
I co-presented the following papers/posters:
A number of my research students were in attendance and I enjoyed having time to talk about their research face-to-face (since most of my students are distance education students).
I also worked on a number of books with colleagues, including Electropalatography for speech assessment and intervention, the second edition of the International guide to speech acquisition,  and  Multilingual speech sound disorders.
The City of Oslo hosted a welcome reception for us at the Oslo City Hall where the Nobel Peace Prize is awarded each year. 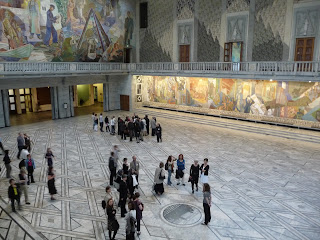 The conference was held at a magnificent venue, the Holemkollen Park Hotel. We were there for the summer solstice, so experienced the very long summer days, and very short nights. Here is a view of the hotel taken at midnight, just as the sun had set, and just after the conference dinner/boat cruise on the Oslo fjord.

I was an invited speaker at a phonological acquisition workshop held at the Norwegian Academy of Science organsed by the Department of Linguistics and Scandinavian Studies, the University of Oslo. My presentation was titled "Consonant cluster acquisition in Australian English-speaking children" and included a genealogy of Australian research about typical and atypical acquisition of consonant clusters. There have been 47 Australian papers published on this topic.

Listening to children in USA 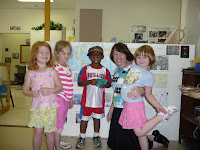 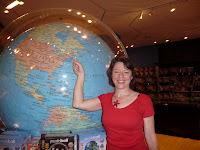 I was invited to visit the Child Study Centre at ETSU to find out about the program and talk with the children. The children told me how they had been looking at maps and learning about the world, so were very excited to find out that I was from another country. I got permission to upload this photo of the children who showed me their maps, postcards, artefacts, and pretend school complete with a wombat student! After I left I posted the children an Australian postcard of a wombat. Later, I visited a toystore in another city and found this huge jigsaw globe. I am sure that the children would have loved it.

From June 6-19 I visited the Centre for Excellence in Early Childhood Learning and Development at East Tennessee State University and worked with Professor Lynn Williams.
I presented two seminars as outlined on the ETSU website:
I have enjoyed working with many people while at ETSU.
Prof. Stephen Camarata drove from Vanderbuilt University to visit us and to discuss research and grants.
I enjoyed talking with
Prof. Becky Isbell about her research into children's art and listening to children
Prof. Nancy Shearer about her international work with children with cleft lip and palate
Prof. Brenda Louw about her work in Africa and her research into Afrikaans and Zulu speech acquisition
Prof. Wally Dixon about his research on children's temperament and language acquisition
Prof. Marty Barrett about computer programming assessments
Prof. Kerry Proctor-Williams, Dr. Sandy Countermine, Dr. Julia Herwig, and so many others. I was made to feel so welcome and learned a lot about people of the Appalachian Mountains and Tennessee.

Children Draw Talking is an art exhibition of illustrations produced by 157 4- to 5-year-old children in the Sound Effects Study. 143 children who had difficulty talking and making speech sounds were invited to draw themselves talking to someone. The resulting drawings have been identified with six focal points, including enlarged ears on the listeners and smaller mouths on the speakers.
The art exhibition has already been shown at the opening session of the 2009 Speech Pathology Australia Conference in Adelaide and the 2009 Asia Pacific Speech Language Hearing Association Conference in Hawai'i. 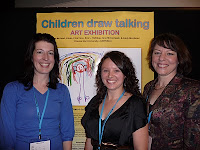 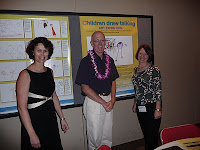 In 2010 it has been shown in the following venues:

June 23, 2010: Oslo, Norway
International Clinical Phonetics and Linguistics Assocation Conference
Approximately 200 people attended the opening session of the ICPLA conference and listened to a half hour presentation about our research with children and the background to the Children Draw Talking art exhibition. The exhibition was displayed throughout the conference.

July: Bristol, United Kingdom
University of the West of England 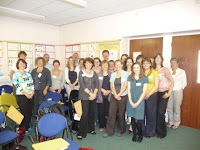